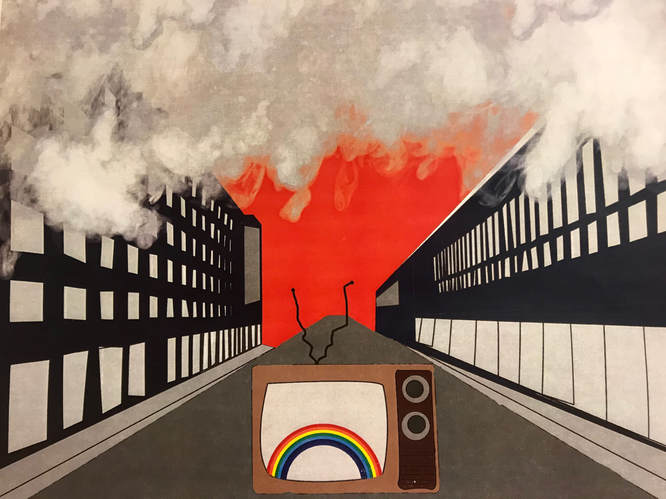 All around the world people use technology daily. Many use it at least fifteen times a day doing things All around the world, people use technology daily.
Technology is a fairly useful tool to this earth and all that have access to it, one of the most popular things in this category is cell phones and all that they hold, but is this getting too powerful and controlling? Cell phones increase the amount of mental illness in teens living in the United States of America.

One in three teenagers from Colorado has reported having felt sad or hopeless for two or more weeks at a time. This is a somewhat higher rate than most would consider normal. The number of students in Colorado who reported to feel sad or depressed increased around five percentage points from 24.3 in 2013 to 29.5 in 2015. This is considerably higher compared to the national rate which stayed the same at 29.5 from 2013- 2015 (“Time Magazine”).

Those who use technology on a more regular basis are shown to have higher symptoms of ADHD with teens. On average a teen will be on their phone for around 2.3 hours a day. A study conducted by Duke University found that the teens spending more time on average online were found to experience more conduct issues, such as fighting, lying, and issues related to behavior (“Duke Today”).

As a nation, we revolve ourselves around technology and all that it brings us. In a world where we can have any information, we want almost all at a few clicks of a button. Does all of this information come at too large of a cost? When we have all of this power, able to be carried around everywhere we go, we can get too carried away. Those who spend more time doing things like browsing the web are shown to have much higher depressive symptoms. In the article “How Depressives Surf the Web” the author describes a study done recording teens and their technology usage: “Our second major discovery was that there were patterns of Internet usage that were statistically high among participants with depressive symptoms compared with those without symptoms. That is, we found indicators: styles of Internet behavior that were signs of depressive people.”(“How Depressives Surf the Web”

Every day the rates of technology usage in adolescents climbs. Many wonder why teens spend so much time spent on their phones, the answer is simple, we’re addicted to them and everything it embodies. When we have them constantly with them it's easy to pick it up without even thinking about it. We like the convenience it offers and the information it gives us.

Collectively the United States of America check their phones 8 billion and upward times a day. Those who are in the age group between 14-19 check their phones the most times daily. This gap between teens also has the highest rate overall to carry some sort of mental disease or disorder (“Americans Check Their Phones 8 Billion Times Per Day”).

Interestingly, humans work on cures for mental diseases and one of the solutions found was to use electronics. In this day and age, apps designed to help with mental illness are one of the more common solutions we see more and more every day.

One of the reasons these apps are gaining popularity is due to the accessibility aspect. Those who don't have regular ability to see therapists are able to use this in a substitute. These apps include virtual doctor visits and diagnoses. Though these apps can be helpful to those in need one of the large concerns to the user's is the confidentiality and privacy aspect of it. These are the main reasons many don't use these apps. One more downside to using these apps is the accuracy they provide because the diagnosing and treatment is done virtually there is a much larger chance for it to be correct (“Technology and the Future of Mental Health Treatment”).

Things like cell phones are large influences to those who use them and even those who don't. When we see things like professionally photoshopped people it makes us question things like our self-worth, and why we won't ever look like that. Like Theodore Roosevelt said, “Comparison is the thief of joy.” This is a very relatable quote to those that believe they aren't enough when they see things like this on their phones. The United States has seen more and more teens being diagnosed and one of the clear main reasons is one simple word, technology

For this project we were required to make and opinion based writing piece called and Op-Ed along with a political cartoon. The writing piece is an opinion based thing where we revolved our topics of our writing around technology. To start this process we did background research about the thesis that we created.  When doing this we put it into a note format to organize our information. After this we started writing and making our political cartoons. We went through many drafts of our Op-Eds. During the writing process we were also creating our cartoons in computer programs such as Adobe Photoshop and Adobe Illustrator.

Some new understandings I have about technology after this project is how much we depend on it. I was always aware of how much we revolve ourselves around technology but this definitely did put it into a new perspective. There are also many others out there also interested in the same topic as me which was, does technology increase mental illness in teens. It was really interesting to see all of the statistics and data gathered about this topic.

In the beginning of the cartoon creating process I was really lost and didn't know where to start. In doing this I created many drafts about what I wanted to do. My first draft was very unrefined and lacked creativity. I tried to create my cartoon in many ways, one of them being tracing over one of my hand drawn models. When I realized this wouldn't work I photoshopped images that I wanted to have in my cartoon and traced over that all in the Adobe Photoshop program. In doing this I did really see improvement in my computer skills.

In the Op-Ed writing process I was definitely confused on where to start for this was not any type of writing I had done before. You have to have so much more to write about in order to make the many short paragraphs that make up your writing. This could help my future writing pieces because the research put into this project was different as well. It did take more of my time to create good research notes to later help me. Writing this also did take time because we went through many drafts.