​I feel that the class expectation I am doing the best with the meeting is making a positive environment. While doing my work I stay focused and do my best to not get distracted or to distract others. I am patient at the points I am frustrated with my work and never let it affect my overall work or final product. I do my best to make the classroom I work in a joyful place. I do this by helping others when they need it and by doing my work to make a piece of work that I am proud of.
I would have to say the one class expectation I feel that I am not meeting as well as I could be is advocating. I don't think that I'm meeting this as well as I could be because when I get confused I don't really do anything to solve this problem. When I am confused I attempt to power through what I am doing, most times this isn't helpful to my learning and I am still confused on how to do something, what to be doing, or how to make my work more professional. In the future, I will make sure I am not as lost in my class time. I will do this by talking more with my classmates if this still leaves anything unclear that I am still confused about I will go to Lori instead of pretending to know how to be doing my work.
I think that in the first seven weeks of class the most interesting thing that I have learned was the whole portion of Diary of a Part-Time Indian. I really liked this because we got to learn about how the reservation the main character affected his life. Because he was Native American so much of his life and personality was stereotyped by others in the book. I really enjoyed reading this book because it was very real, the writer didn't hold back his emotions in it, he, however, decided to elevate the book with his drawings to support what he wrote. I really liked learning about this because I previously had not learned about how the reservation affects people's lives so much. I also really enjoyed it because it connected back to the Mask project I studied last year. In that project, we learned about stereotypes and what comes with them. I enjoyed how the book was really honest with the reader. This made me feel more connected to the book so I was able to be much more interested in it making it a much more enjoyable experience to learn about. 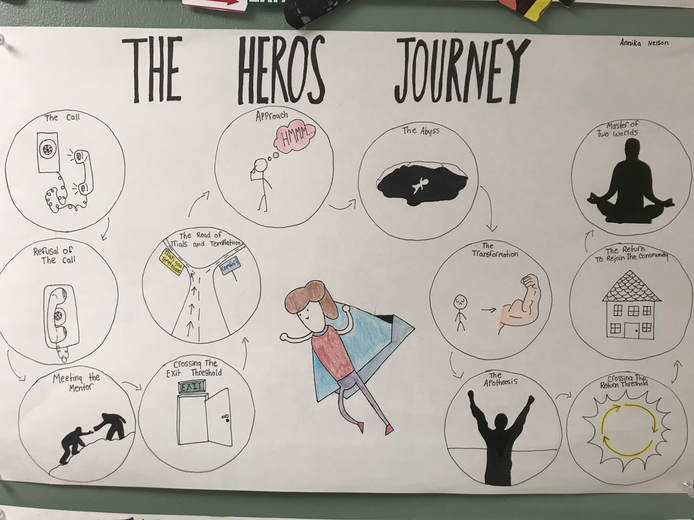 During the Socratic Seminar many powerful things were said mostly about how Junior thinks his life is focused more on his culture rather than his personality. One comment that really stuck with me was, “It's entirely possible to be comfortable and miserable at the same time.” For me this comment was really impactful. It brought me back to the fact that you can be living a horrible life, but you are ok with it because it's what you know and you don't really know if there is much else out there. I think that Junior releases this fact and wants to make a change for himself because he wants to do something with his life. I hadn't really thought about this remark that much before hearing it and really connecting with it. It is so possible to get suck in an everyday routine that can affect your wellbeing, but it is more convenient to stay with what you are doing, and for some it is much harder to escape this.

In this book Juniors drawings convey the ability to get his thoughts out in ways other than words and a sense of a coping mechanism for the hardships he deals with in his life.

Throughout the entire book Juniors, drawings make him able to put his thoughts out on paper in ways other than words. “ I draw because words are too unpredictable. I draw because words are too limited. If you speak and write in English, or Spanish, or Chinese, or any other language, then only a percentage of human beings will get your meaning. But when you draw a picture, everybody can understand it. ”(5). Juniors drawings are so important to him because it connects him to his more emotional state, within his drawings you can see his emotional side that is harder to portray through his words. Within the drawings, Junior provides throughout the book it gives a connection to what he narrates. While looking at everything he adds to the book the vision of how his mind works becomes more clear the more you see the doodles and sketches he makes. In many of the drawings, Junior creates it shows what he writes but instead of explaining himself with a collection of letters he puts together scribbled lines to express himself. Through the book Junior is mostly in despair, mostly about his culture and overall life, because of this there is a large sense of resentment that he carries around with him. In one of the drawings, Junior includes it is him standing next to a directory sign with four branches off of it. To the left there are two signs, one reading Rez and the other being home. To the right, there are the other two reading Hope and the other sign with many question marks on it. Junior stands on the right side directing towards hope looking in that direction. He looks saddened and small. On the left the side pointing to the Rez has two houses that look in shambles, next to the houses is a moose (Alexie 43). I believe that this is representing the fact that he sees the reservation as a no man's land that doesn't have much to offer. The side leading towards hope is leading away from the reservation which says a lot about what he wants for his life. Though the right side going towards hope doesn't have much drawn on it it is still leading to better things than what he has on the reservation. This connects back to the fact that he is more emotional in his drawings because it shows what Junior wants. It makes us see that he has dreams that have to do with things other than the reservation because that isn't all that he is. Though his drawings are a large part of what he wants the world to see of him it isn't the only reason they are included in the book.

Juniors illustrations also allow him to have a coping mechanism for the adversities he deals with in his daily life. “I wish I were magical, but I am really just a poor-ass reservation kid living with his poor-ass family on the poor-ass Spokane Indian Reservation.”(Alexie 7). Because Junior faces so many challenges in his life such as his poverty and unpopularity, he uses his drawings as something to give him comfort. During the troubles, Junior is mostly in despair. Because of this Junior uses the humor his drawings entail as a coping mechanism for his misfortunes. At the end of the book, after more difficulties arise such as the death of his sister and grandmother, Junior has trouble coping with this. “When it comes to death we know that laughter  and tears are pretty much the same things.” Along with this quote, there is a drawing of two faces molded together. One profile is a happy smiling face and the other is a saddened one with tears rolling down beneath its eyes. A rainbow splits the two sides of the faces making the difference between the two emotions seem some drastic (Alexie 166). I think that this drawing is representing the happy face Junior is trying to portray to the rest of the world while the unhappy version on the other side is what he really feels inside. This theory also connects to the part-time aspect of the book as he is showing two sides of himself. This drawing is a coping mechanism because he is putting his mind out on the paper in front of him. He is showing the two sides of himself mostly giving the happier content side of himself to the world in front of him while hiding the more miserable portion that he must manage every day. With all of this in mind, Juniors drawings are truly the unmistaken way to allow him to express himself along with giving him the competence to deal with the challenges he faces in his everyday life.

Reading this book really brought me back to last year while I was studying the Mask Project. During this project we studied how social norms and stereotypes affect how people act and how their personalities change due to this effect. Everyone wears a mask to hide their true selves in order to seem more likeable to those also wearing a mask. This sparked a lot of interest for me because not many people put their true selves out on the table, and the few that do are mocked and ridiculed for being themselves.